Google Photos is new (or at least vastly improved) and there are still lots of things that need work, but every day that we use Google photos at IGBIS we find new uses and innovate ways to save ourselves time and dramas. The automatic syncing is worth the effort of moving over all on its own.

Once uploaded (or even better synced) the photos (or videos) are stored in one place, but there are at least five different ways to access or use your photos (for now).

1. Google Photos on the sidebar of your Google Drive 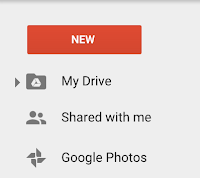 2. A folder on your Google Drive (which you can choose to have or not have)

4. Via the Google photos web app (or the app on your phone or iPad) The Best option in my opinion
https://photos.google.com/ 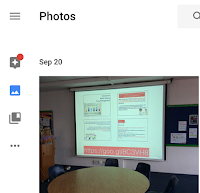 I think you can also get them via Picasa Web Albums
https://picasaweb.google.com/home

This makes it all very confusing so I recommend to all staff (especially staff who are not that competent) to use the Google Photos web app for at least three reasons. I don't know if Picasa web albums and Google+ photos will be maintained. The Web app looks the same as the iPad app, it allows you to do so much more and it is easy to use and share albums and photos.

At IGBIS some of the ways that Google photos saves us time, creates great stuff and is just plain cool include

1. Auto Syncing
Last year
We used to use iCloud to automatically sync photos from teacher iPads and even some class iPads (all photos going to the teachers photos app) This didn't work for video, if a class or teacher took too many photos the free 5gb limit could fill very quickly and it was hard and time consuming to move the photos to our Google Apps (Blogger, Docs etc). If teachers had an Android phone this syncing wouldn't work.

This Year
We use Google Photo's on the iPad or teacher phones (IOS and Android), it is eay to set up (teachers just log into their Google Accounts), Video uploads automatically and we have unlimited storage (so no more messages saying the account is full)

We have also set up class Google Accounts so that all the iPads in a class can be synced to the same account, this means students can see all photos and videos no matter what iPad they are on. It also means the teachers can access all the photos and videos the students take (we set up a Profile on Google Chrome with the class account). We can also log into the class account and share the Google photos folder directly with the teacher or students so they can have it on their own drives.

With iPads this is great because 99.5% of everything students make on an iPad either ends up as a photo or a Video.

2. Google Apps Integration
Last Year
Teachers would drag photos from iPhoto (or Photos) onto their desktop then drag them into Google Docs or upload them to Google Sites or their Blogger blog. For videos they would have to plug in their iPads, import them into iPhotos, export the videos and upload them to YouTube.

This Year
Everything is just there. Go to insert an image in a Doc, Slides presentation, Drawing or sheet and your albums are one of the options.

In Gmail Insert Image gives you an option to use photos from your albums
Using Blogger? Insert directly from a Picasa web Album
On a Google site, you can import directly using the Insert / Google+ for both individual photos and albums. The only issue with this is that photos have to be in an album before you can search for them.

Videos are much easier to use as well, in YouTube when you click the upload video button you now get an option to import videos from Google Photos. (much easier than what we used to do)

Now with automatic syncing (especially syncing class iPads to a single account) and easily using the photos (and videos) in all GAFE apps the task of using photos and videos in simplified and sped up.

But that is not all

3. Sharing Photos
Last Year
Teachers would drag photos from iPhoto (or Photos) onto their desktop then drag them into a Google Drive folder which they would then share or they would email photos. Videos had to be once again be imported onto a computer and then uploaded to a Google Drive Folder or sent directly to YouTube

This Year
Teachers create an Album, we generate a sharing link to the album, this link is then placed on a Google site called photo sharing. If anyone in the school wants to see photos from grade 3 Art, or Kindergarten Music or Grade 5 Chinese they just go to the album. When a teacher wants to add photos they just add them to the appropriate album in Google photos (either on the iPad, Phone or on the web app)

Teachers can also set up albums for each student in their class, then share the album with the parents or the students, once again to update photos it can be done on the App or on the Web.

For camps we have set up camp websites with links to particular albums, once a photo is put in the Album it is automatically accessible from the Camp Site. As yet there is no way to collaborate on an album (like iCloud photo albums) so to get around this we have created Google Accounts for each camp and each iPad taken on camp will be logged into this account, this also means that all the photos taken on camp will be stored in one place, while teachers can choose the photos they want to share with the parents.

This is only the start of how we share photos, I am sure there are many more possibilities that will come to us as the year progresses.

4. Organising Photos
Last Year
This was done in iPhoto and then maybe again on a Google Drive folder or using Picasa, teachers had to remember to update all the areas and photos were not always where you wanted them when you needed them. Videos were just as bad.

This Year
With it all being done on Google Photos, in albums, it is much easier.

Specialist teachers have albums for each grade level which contains all their photos and videos, this can easily be used to create portfolios or to share photos with the kids. They also then have a sharing album which they can share on class blogs or directly with the parents.

5. Backing up Photos
Last Year
It was through iCloud (automatically) and maybe Google Drive which was fine except it didn't include video and it only gave us 5GB

6. Extra Cool Stuff
Last Year
People used other apps, Pic collage, Sonic Pics etc which are all very cool, they still use them this year (students and teachers may have to save photos to the Camera roll first, which some teachers are not happy about)

This Year
People still use their favourite apps, but

Built into Google photos (mobile app) there also have some great tools including the ability to use photos to make a photo story, a movie (you can add titles and music), a collage and a gif. These features are not on the web app.

The Google photo assistant will sometime choose some of your photos and automatically make some of these things for you, but we find it is much better if the students or teachers can choose the images that go into the photo story or animation.

Teachers are creating photo stories on the bus on the way home from excursions and then sharing them with parents (a two minute job) once they get back to school. If they are using their phone they can add them to their website while still on the bus.

We are looking forward to the photo stories and videos that will be created and shared while the students are on camp in the coming weeks.

Photos can also be edited directly on the web app or the mobile app including adding descriptions.

It's not perfect
Nothing is, some complaints include teachers and students have are having to download the photos to use in other apps, sometimes the videos created in the Google photos app don't upload and if you don't open Google photos the photos and videos don't sync.

We feel though that Google photos has added a lot to our iPad program and the way we use photos and videos at our school, we are saving time, creating great products and have become much more collaborative.

Our students make a lot of videos and photos on the class iPads (as do the teachers) pretty much everything they create ends up as either a photo or a video therefore we need an easy solution.

The big pluses for us are
- auto syncing many devices including video
- ease of use in GAFE
- easily sharing photos including photo stories, collages and video
- did I mention video is auto synced?

I would love to hear how others are using Google Photos in their schools.
Posted by Geoff Derry at 11:25