This year, for my usual start of year session with staff I was tasked with reminding the staff some of the systems we use at school 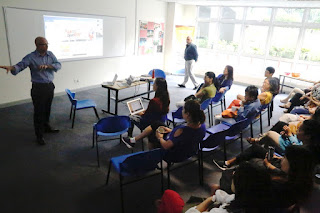 Rather than lecture, I chose to model active inquiry-based learning. This involved more work for me, but the results were much more effective and therefore rewarding.

I got the idea from Wesley Przybyoski at the Google Apps Summit in KL. Wes' Amazing Race Site

I developed and facilitated a Google Apps Amazing Race Challenge, whereby staff teams completed a series of online challenges; as they completed each challenge they submitted their product and were sent to the next location / challenge. This continued until they finished racing around the “world”.

I first posted a link to a Google Form (that was the sign up), on the introductory slideshow. I then used the Form Ranger Google forms add on and the data from the sign up form to populate a drop down question in the next 7 google forms so that the team name would be consistent. Form ranger will take data from a Google Sheet and auto-populate questions in a Google Form. So it is great for creating dynamic interactive forms where the questions can change depending on other form submissions.

Once they completed the sign up form, (using the Form Mule add on) they were emailed the first challenge as a my maps link. You can set up custom emails using Form Mule that are activated once a form is completed.

I created 7 different MyMaps (Example map no 6). These maps contained the tasks that the staff had to complete. Each task had to be completed and a Google Form filled in with a link to the product as evidence they completed the challenge. 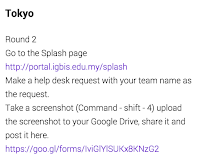 This continued until they had completed all seven challenges. I commandeered two staff members to be the judges and recorders. They were given access to the spreadsheets and gave points depending on the accuracy of the answer, speed and extra points. These were then recorded on another spreadsheet which auto updated on a slide in the Google presentation. 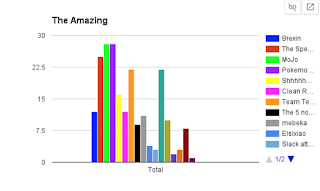 
I am sure someone won, I don't know who, it doesn't really matter. I do know that all the staff had to work together in teams and actually do the type of tasks they were expected to do on a daily or weekly basis at school. If they forgot how to do something they also had some contacts that they could call on that could show them how to do it

The staff loved it and participated fully, I even had one of our new teachers come up to me afterwards and say how she loved the fact that anything I presented was done in such a creative and interactive way. She said it was much better than the usual PD sessions she had attended.

During a debrief, many of the staff commented on how it was much better to do active hands on PD rather than listen to a lecture. A few even booked some coaching time with me to help them develop their own Amazing Race for their classes.
Posted by Geoff Derry at 15:56