Bring your Art to life

Think Harry Potter and the talking Portraits from Hogwarts

Then think what if we had this in our classroom?

The How do I do this is easy?

It is how could I use this in my students learning that requires some thinking.

My first response is for FUN. Why not just do it for some laughs and while doing it the kids will also learn some tech skills and tools.

If you really need a curriculum based answer to "How can I use this in my class?", try this

The way our grade three team use it is to create talking images of body parts.

The students
1. researched a body system as part of their inquiry unit on healthy bodies
2. wrote a short report in the first person (as if they were that body part)
3. they then drew or found an image of the body part 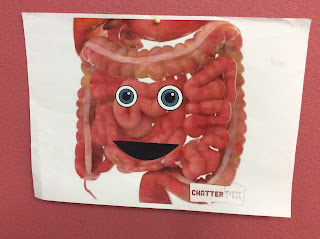 4. they used Chatterpix or YaKit kids to create a talking picture. These Apps allow students to draw a mouth on an image and then record an audio track, when it is played back the mouth moves and the pictures comes to life. It is lots of fun and can be used to make any image or photo talk.

Here you can see the students created talking wanted posters for different types of Bacteria. It has so many uses for any subject area.

5. We then used the Aurasma app to bring the talking pictures to life.
Aurasma is an augmented reality app that can use any image (as long as it can read the image clearly) as a trigger to start a video or show a video. It is quite cool because it is an augmented reality app, that means the video floats over the top of a live view from the camera. (It adds something to reality)
In our case we have added a floating talking video to the live view. Basically we are bringing the still images to life just like the talking pictures in Harry Potter.

Sometimes Aurasma didn't like the original image, it couldn't recognise it clearly enough and the slider wouldn't move to the green zone.

To solve this we added some extra contrast to the trigger image, a name or extra diagram in thick black pen to make sure we got the slider in the green zone.

I know that many people complain about Aurasma being a bit complicated especially when it comes to channels and viewing other auras. One thing we do at school to make using Aurasma easier is to have all the iPads signed into a single Aurasma account, we can still have lots of channels, it just makes it a bit easier to get started and to get the kids using Aurasma.

There are heaps of how to use Aurasma tutorials on Youtube, Here is a quick (and a bit rough) tutorial on how to add a video from the camera roll (Chatterpix video) to a trigger image (still image or picture)

This was a huge hit with parents and students on student led conference day and during their body expo. The reality is that this same technique can be used in any subject.

Some other ways students and teachers could use this


There are so many different ways you can use this in any class.  Anything you can create on an iPad can be turned into an Aura.

I would love to hear any other ideas in the comment s below.

Email ThisBlogThis!Share to TwitterShare to FacebookShare to Pinterest
Labels: app smashing, How to, iPad, tech tips