In grade 6 a couple of weeks ago, we did this scavenger hunt. 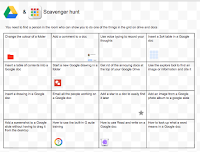 Whenever I think of an idea for an activity, I always go to Google it to see if anyone has already created one that I could use. I found this Google Doc's Scavenger Hunt by Catlin Tucker. But it wasn't exactly what I wanted, I wanted the kids getting up, moving around and learning together rather than sitting at their laptops. 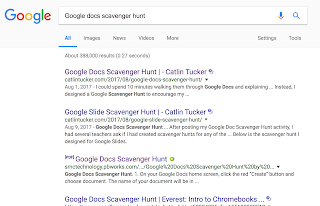 I found a few others but they were all a bit 'sit at your computer and do this', So I had to create my own. I used Google drawings and just stole a few ideas and developed some of my own for the tasks.

It was a collaborative activity / lesson / activity. The students had to find someone else in the room who could do the task on the square (even if they already knew how to do it). Then that person had to show them how to do it. e.g. if the task was "use voice typing to record your thoughts" someone in the class had to show you on their computer how to do it (not just tell you they could do it). The students then wrote the name of the student who showed them.

If no one in the class knew how to do it, the kids could research (google it) or just play until they worked it out. If the students knew how to do something but no one else did, they had to show someone, then the person they just showed had to demonstrate the skill. 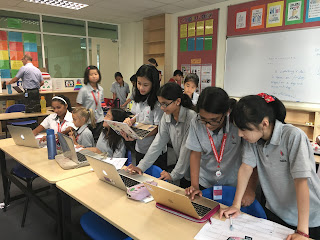 It was lots of fun and it was great to see the kids teaching each other. Kids were walking around the room talking to each other. Some of the interactions I heard included 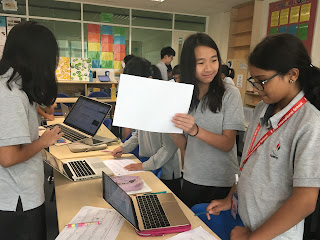 It was really powerful to hear lots of oohhhs and ahhhhs as students learnt a new skill or hint (they loved voice typing) and the energy in the room was super high. Much better than walking past a classroom with everyone with their heads down in computers and no human to human interaction. 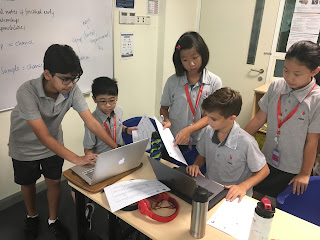 One of the big takeaways was that there are lots of other people in our class that can help us with technology (and it is OK to ask them for help). The students were given explicit permission to ask each other for help and told that the teachers would also be asking them for help.

We are now thinking of other ways we can use this concept with other tools and apps.