Learning 2 it's true it is all about the learning

In 2010 I had just started teaching overseas and was based in Suzhou (just outside of Shanghai). I had a job as the Middle school Tech integrator. I had only been at the school for two months when the school had the foresight to send me to Shanghai for Learning2. 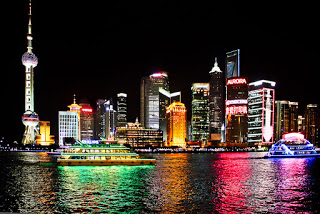 I had attended large edtech conferences in Australia, but they were the usual keynote speakers and workshop type conferences nothing innovative, new or exciting. Learning2 was different, I was placed in a cohort with people in similar positions to me (great for networking). There was also plenty of time to network and the quality of the workshops was second to none, (I even got to meet some of my edtech heroes) with some really big names and the unconferences were completely new and intriguing. It was conference like no other and upon leaving I thought I am going to the next one no matter what (and hopefully bringing some more teachers with me). It was worth going just for the networking.

I was lucky enough to attend the next 6 learning 2's and presented a variety of 1 hour workshops. I missed Learning 2's return to Shanghai in 2017, (I had already spent my PD budget and had a few other goals that year.

In 2019 applied to be a L2 Leader and was fortunate enough to get the call up. This was something I was keen to do since attending L2 2012 in Beijing where 2 hr extended sessions were first run and the workshop leaders gave pecha kucha talks. At each L2 since then I thought I would love to be up there in front of a large crowd and give a more in depth workshop. 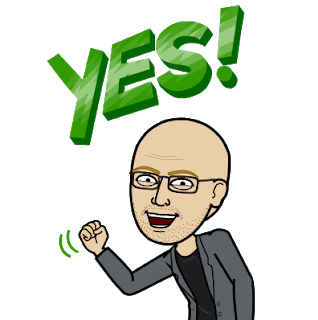 After being a tech coach for 8 years overseas (and a few years in Australia before that) I had presented at a heap of conferences, workshops and school events and had even given a 12 minute TED style talk to over 1800 Heads of schools at the IB world conference in Singapore. I had ticked a few boxes and was a fairly confident presenter. Regardless I was still excited to be a L2 leader and I was going to Japan. I knew the calibre of the sessions and the rigour of the L2 talks.

From my first acceptance email, this was different, I had to sign a contract and commit to a process (including a three week online training course) rather than just showing up and running a one or two hour session. The organisers were constantly in contact and the whole process was super professional.

I had a fairly good idea of what my extended session (AR and VR creation tools) was going to look like. I had done my Google Innovator project on this topic and had already presented at Edtech summits, 21CLHK and the AIMS conference in Malaysia on exactly this topic with good feedback. I also had a couple of ideas for a L2 talk.

Then the pre conference training started and everything changed. 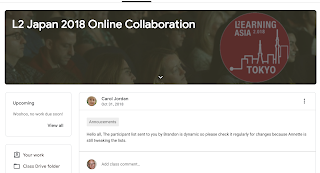 I loved the fact that my preconceptions were challenged and that I had to clearly articulate a set of goals and objectives for my extended session. It made me rethink things and empathise with my learners (that people who would attend my session). The three week online course also allowed me to get to know the other leaders and revisit was L2 and adult learning was all about.

I already felt that I was better prepared for my session than any other workshop I had ever run. Part of the process of being a L2 leader is that you spend a couple of days before the conference starts training and refining your presentation and talk. I was looking forward to working with some super professional coaches and picking the brains of people who know what they are talking about.

The onsite training and planning time was like nothing I had done before, having time to practice my L2 talk and to work with other educators hearing what they were doing and watching them prepare, share and collaborate was one of the best learning experiences of my teaching career. Everyone was focussed on the conference and how to make it great for the participants.

The social aspect was also second to none, a great opportunity to catch up with friends and meet new and dynamic people in a relaxed setting helped build bonds and foster new friendships. I was already getting so much out of this conference before it even started. 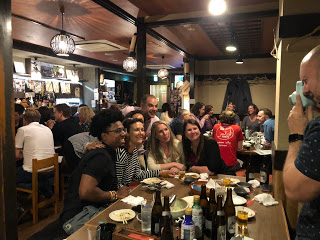 Once we did start I felt confident, ready and couldn't wait to get my participants playing with and creating their own AR and VR experiences and I felt like I was giving them a variety of tools and strategies they could take back to their classrooms straight away.

My first two and a half hour extended session went so quickly and it was refreshing to not have to rush through activities and give the participants time to explore, play and create.

Even better though was that an hour after we finished we had in our hands the feedback from participants and the L2 leaders as a team debriefed our sessions and shared successes and failures in a safe environment with the sole purpose of improving ourselves. Like having time before the conference to acclimatise and prepare this immediate feedback and debrief time was new for me and was probably the most valuable part of presenting at the conference. Other times I had presented I might get a spreadsheet back a week later with some scores and ideas on how to improve, not as useful as the immediate L2 feedback and debrief.

Then I got to do my new and improved session again acting on the feedback, although it must have been OK the first time because I had a few people come to me and ask if they could sneak into my second session because they heard from other people how good it was the first time round. Needless to say my feedback scores were even higher the second time.

Finally it was my turn to get up on stage, My L2 talk had been chosen to be done on the last night as part of the closing, talk about pressure. I really couldn't relax and unwind until I was all done. I was nervous as could be, but still had a heap of fun presenting and enjoyed the fact that I had opportunities to workshop my talk and even practice on stage before I did it. 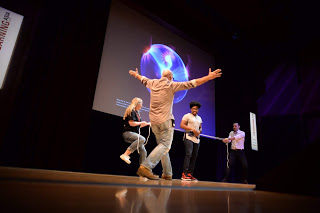 I got some good feedback, had lots of fun and learnt so much about myself as a learner and presenter.

The entire process (and yes it is a process and not just an event) of being a Learning2 leader was one of the most valuable learning experiences I have had as an educator. Simple things like making a video to advertise my session helped me to clarify my thoughts and ideas. I also had a blast and made a heap of great friends.

It is true that Learning2 is all about the learning