I forgot how much I love Scratch, I have been running an after school ASA for grade 4 students using Scratch. Scratch is a drag and drop block coding app that is low entry high ceiling, meaning it is easy to get started but you can program some pretty complex stuff.

I was working with a grade 7 Math teacher helping her to plan a MYP Criterion C,D probability assessment. The current probability assessment had students creating their own "win at the fair" game to make money. They explored some common fair games and then made a game where the owner would make a profit. While this task is open ended, it took a lot of time and there wasn't very much higher level thinking or Maths involved.

It reminded me of a really cool Math300 assessment from years ago where students were given a win at the fair type game.  The students had to identify who won or lost (the person playing or the fair owner). It turns out the game is set up so the fair owner loses quite a bit of money. Students then have to adjust the game so the fair owner wins. It included an app to run simulations where students could change different variables, explore theoretical probability vs real life results and run the game thousands of times in the blink of an eye. The simulation and the ability for students to change variables to explore real life probability was the greatest strength of the activity.

So with this in mind, we created our own win at the fair game and simulation.

I created a game board in Google Slides 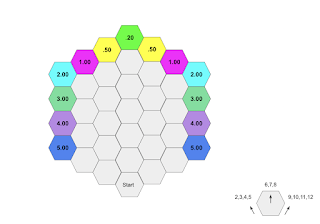 The idea of the game is that each game costs $1, the player places a marker on the start hexagon. The player then rolls two dice and adds the totals together. depending on the sum the marker moves left, up or right.

The player keep rolling until they get to a coloured hexagon, they get the prize on the hexagon they land on.
To demonstrate the game I created this project in Scratch. It can be projected to show how the game is played. It also keeps results and profit / loss.

Once the game had been demonstrated we gave the students a game board and some dice and they played the game and recorded their results. We then collected all the results from the different groups to get a class total. 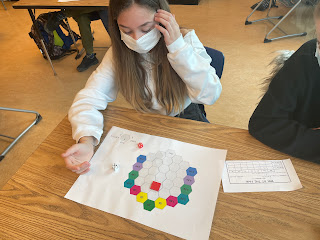 It was pretty obvious that with these rules the game owner loses and the player wins, meaning the game owner is losing money. There is also a feature in the scratch demonstration that allows you to play 100 game and see the results.
The students were given the scratch project and then answered some questions about the game. 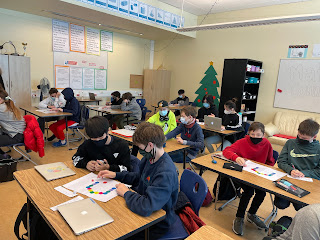 To redesign the game so that the fair own makes a "fair profit" the students had to think about some of the psychology of carnival or gambling games and the notion of a fair profit. Then consider some variables they could change and test their theories.
To change the game the students can either change the cost (super easy), change the prizes (easy), change the numbers that decide the direction of the counter (harder) or a combination (very complex).
To help with the next part of the assessment, I created another version of the simulation.
Win at the fair simulation 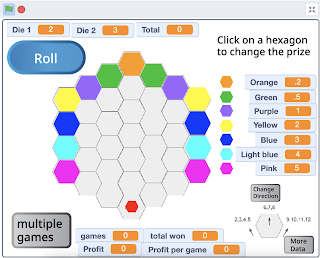 This took a lot more coding, but was lots of fun to make and includes the following features
The ability to
The simulation calculates the total profit and profit per game, so students can get immediate feedback on how their changes effect the long term result of the game.
Once the students have run the simulation multiple times, There is also an extra button to get more data to help with analysis. 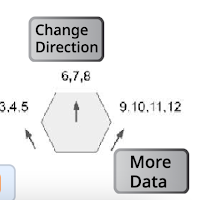 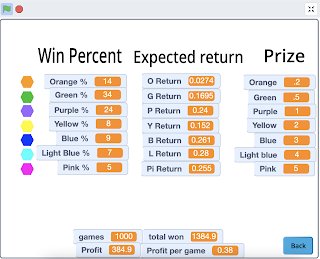 This is useful because the students can see which prize gives the best return. For the owner to make a profit the sum of all the expected returns must be less than 1.
The actual task given to the students was very open ended with little structure of how to describe their solution, our thinking here was that MYP math criterion C (Communication) asks that students 'organize information using a logical structure.' We wanted the students to choose how they organise and justify their thinking.
This is what was given to the students.

We also gave the students the criterion (C & D) so they could check what they have done against the criteria. 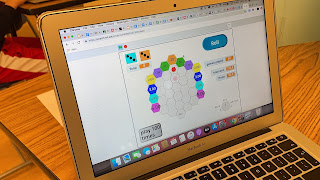 What I liked about this assessment was that it was engaging and was an authentic real life investigation. A student could developed a strategy, then test it by running the simulation, make a change and run it again. This guess and check aspect allowed students to think about real life probability and compare it to theoretical probability. The thinking and creativity behind some of the strategies helped develop higher level thinking skills.
The assessment also allowed students at a variety of ability levels to succeed, a struggling student could make simple changes and a confident student could change multiple variables, they still got to complete all parts of the assessment and communicate their understanding.
Some students also looked at the coding behind the scratch project and had heaps of questions about how I made it

Once the assessment was finished we received lots of positive feedback from parents, teachers and the students.
One parent (who is also a teacher) commented that she had never seen her daughter so much into a math assessment. Her daughter and father sat on the floor and discussed the strategies and thinking behind the assessment over several nights.
Several students told the teacher that this was the best math assessment they had ever done. In their end of year survey 35% said it was their favourite unit (the most of any units)
Here are some of their comments from their end of year class feedback survey

The teacher was also super excited about the assessment and let me know how great it was to see the students engaged, she commented that one of her less engaged students was on task,seemed to be enjoying the assessment and produced his best mark of the year. 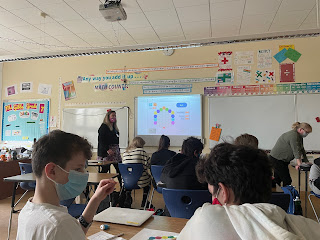 Here is a link to a copy of the assessment (including links to the scratch projects) feel free to copy it and try it with your class.
This Article from the Australian Mathematics teacher outlines some of the benefits and high order thinking from the original maths 300 activity.