At the recent KL Summit I ran my "Amazing Race Google style" workshop. This is something I have been doing for a while (usually with staff as a beginning of the year activity). It does take a while to set up, but is well worth it. I originally got the idea from Wesley Przybyoski at the Google Apps Summit in KL (2015). Wes' Amazing Race Site


Last year I blogged about my staff Google Amazing Race here. Reading over it now, I noticed it is a bit light on detail and for my KL Summit version I added a few extra features. With this in mind I thought it might be time for a more detailed explanation and an update on how it could be used. 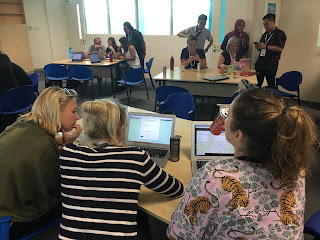 All of the resources and links can be found here geoffderry.com


To start the participants got into teams of 3 or 4, they thought of a team name and created a team chant. They entered these details into a Google form. (this is how I collected the email addresses of each team) Once everyone was done we went around the room and each team shared their chant. (This gave me a chance to refresh Form Ranger in each of the google forms so that names were automatically added - but more about this later)

To start the race I pressed the magic button in Form Mule and the first email was sent out to each team.
The teams had to 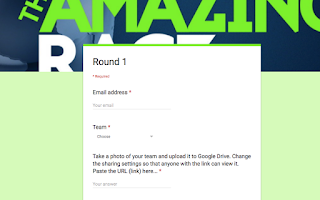 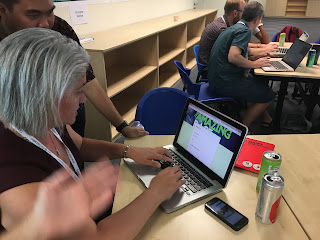 I also had some student helpers who actually joined some of the teams and added an extra element to the experience.

The whole thing was high energy, fun and some people even learned some things. All of the tasks were skills, apps or hints on how the participants could make their own amazing race.
I got lots of positive feedback from the participants. Including this quote

"will definitely do an amazing race activity for a summative in grade 4 and will also look into creating one of these for new staff orientation." 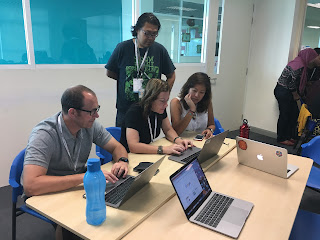 The winning team was of course

The legion of the Rainbow Unicorns

So how did I create all this mayhem and fun?